Curated by Julia Moustacchi at The LAB Gallery, Thursday 16 January to Sunday 19 January 2020 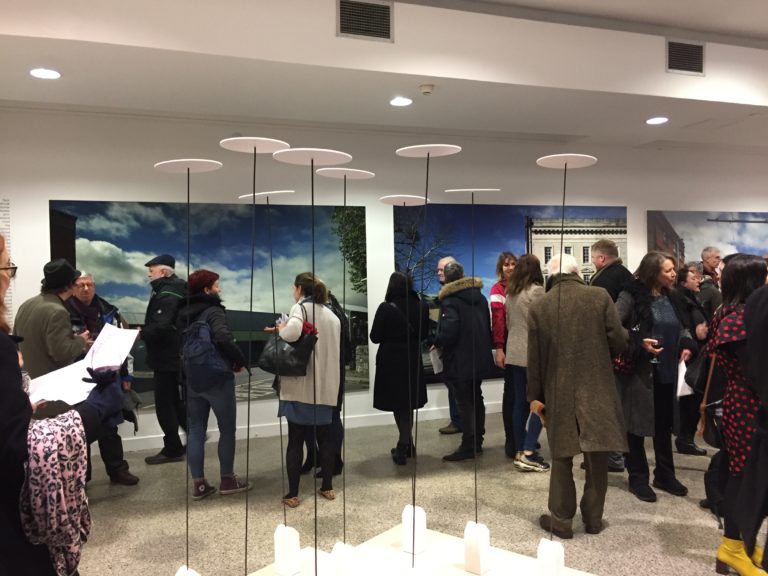 In January 2020, the LAB gallery presented the practical research projects of ten artists at the conclusion of  their participation in the IADT Masters in Art and Research Collaboration (ARC).  Working over a period of eighteen months, and evolving their practices within a variety of contexts, media and situations, this is the first time these ten artists exhibited their work together within the same physical space. Since 2009, IADT has built a strong relationship with the LAB Gallery, an institution that is dedicated to supporting experimental and emerging contemporary art practices. Allowing risk-taking, the LAB functions here as an in-between space, enabling a connection between the infrastructures of the public gallery and the art college graduation show. In this unexplored territory, where boundaries and conventions are being jostled, a place is made for new possibilities and becomings.

Julia Moustacchi is a French curator based in Dublin and a graduate of the MA in Cultural Policy and Arts Management, UCD. She works as an independent curator, educator and arts manager and recently joined Basic Space as Co-Director. Julia is also currently involved in the research and development of Visual Thinking Strategies (VTS) with Dublin City Arts Office. In summer 2019, she presented a collaborative performance with artist Elaine Grainger, The Possibilities of Place (Centre Culturel Irlandais, Paris and Temple Bar Gallery & Studios, Dublin). She has also worked with artist and curator Michelle Browne on the curation and production of the large-scale collaborative arts programme The Citizen Cycle (January-June 2019) and, in 2018, she and Sheena Barrett co-curated I Slept Like A Stone in the LAB Gallery, an exhibition realised in partnership with Create Ireland to celebrate the end of the four-year European Collaborative Arts Partnership Programme (CAPP). 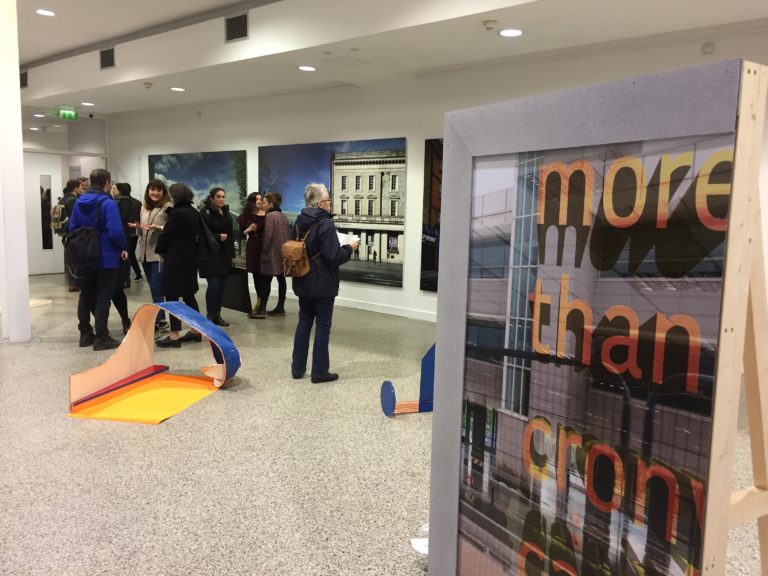 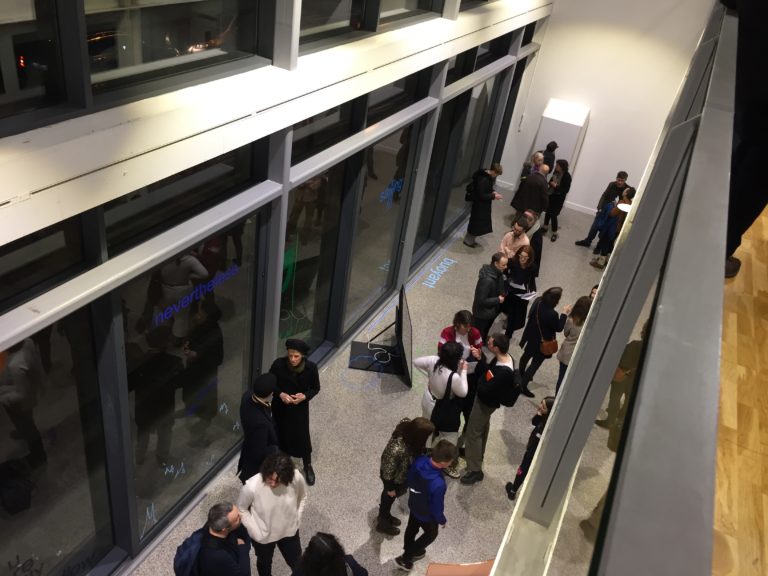 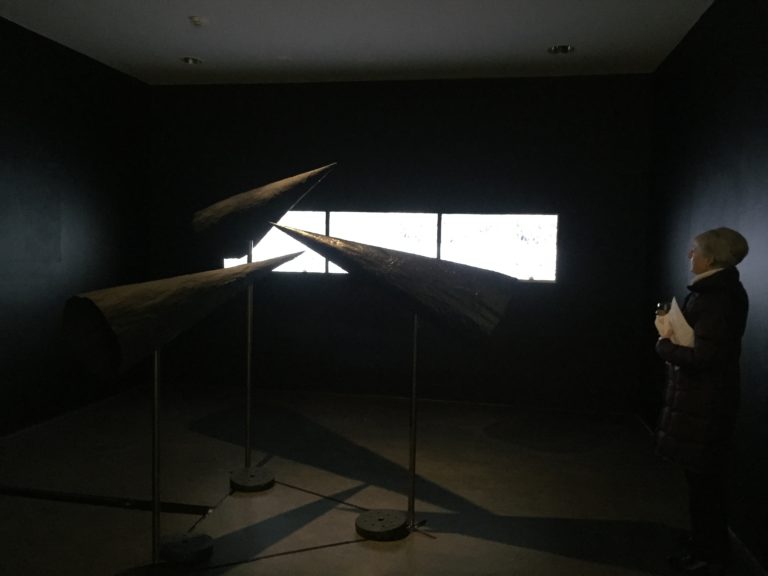 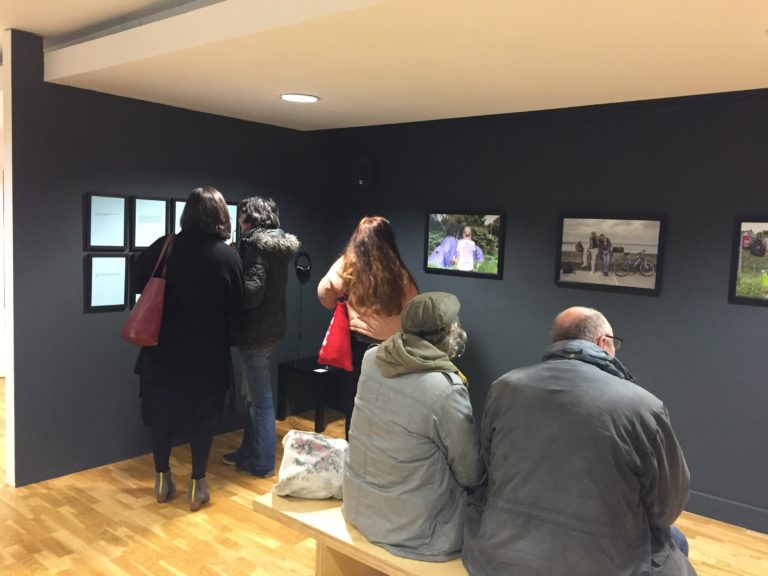 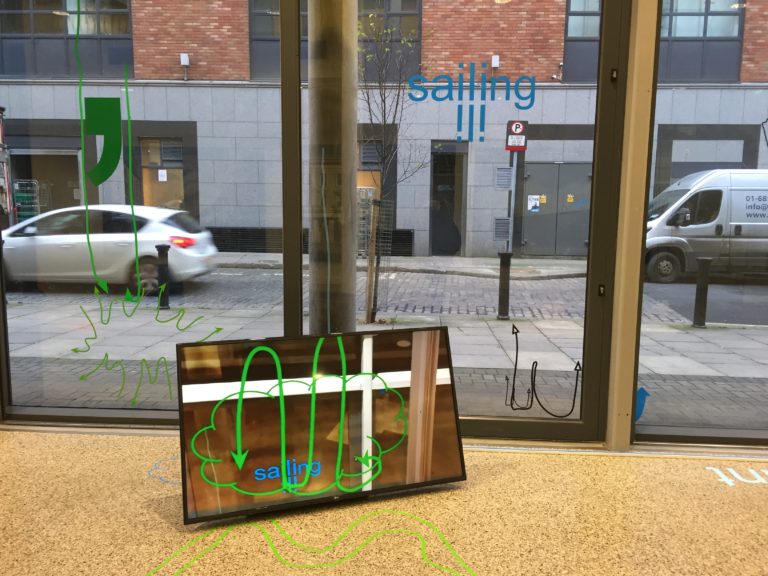 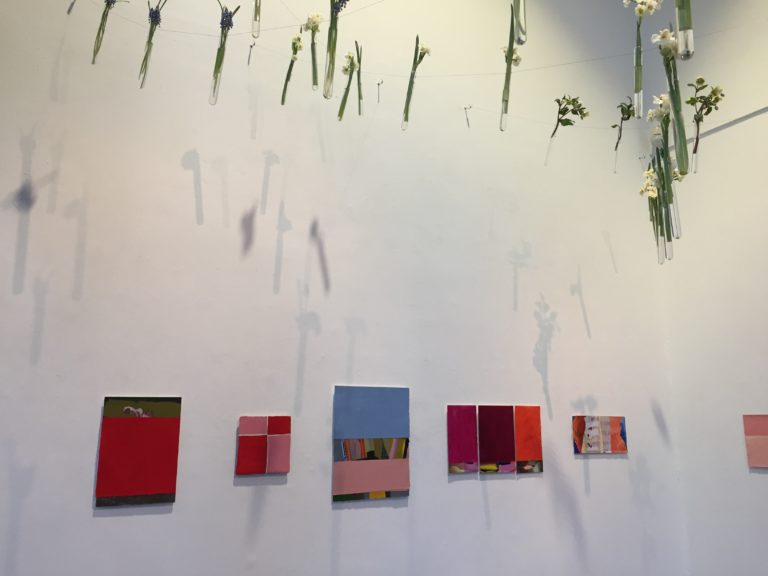 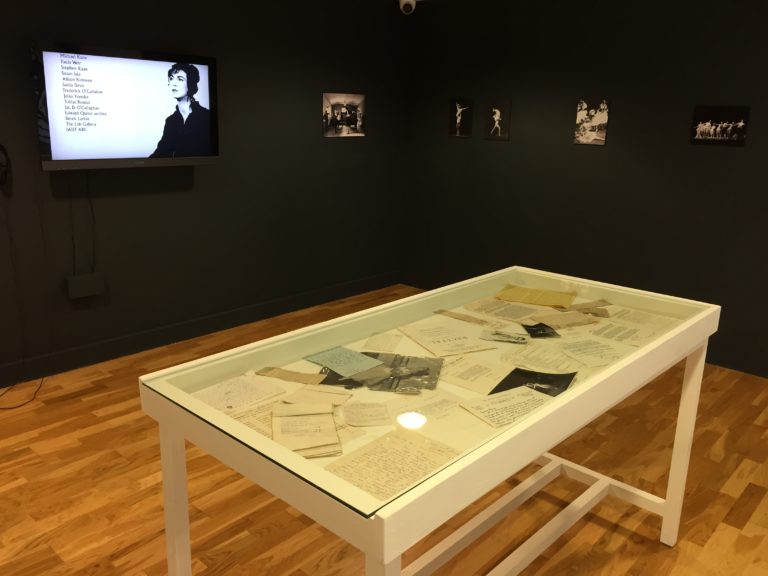 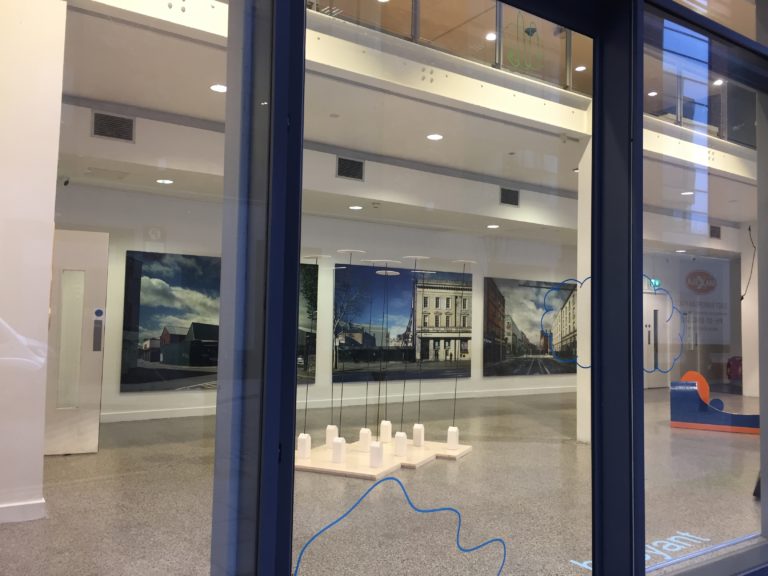 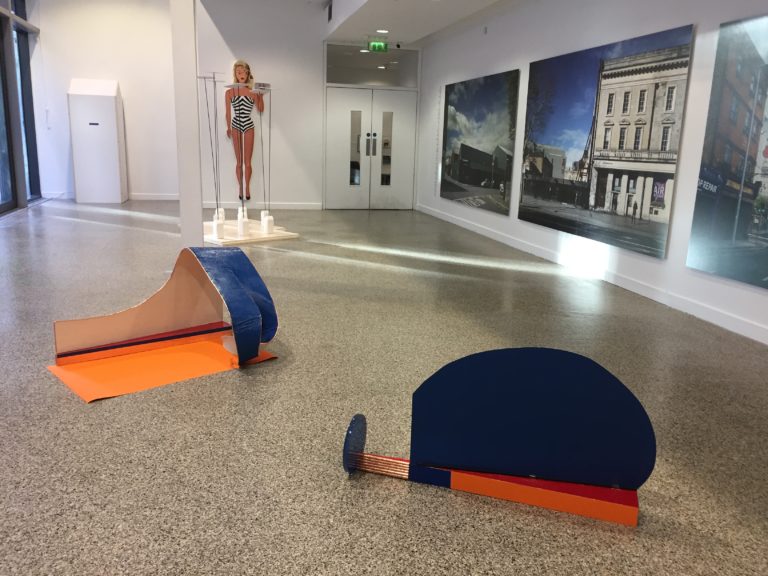 Brenda Brady makes small-scale works on paper that explore and exploit the affective potential of colour and texture. Her process often begins with a response to organic forms and handmade objects encountered in her own domestic environment, such as plants, ceramics or other semi-functional things. She has developed an intuitive methodology that sometimes begins with observation but while figurative references are important in her process, they are usually obscured in the finished work, which is structured around a dynamic of ‘hide and reveal’ that balances the obscured with the visible. Each piece is constructed through multiple stages of assemblage, layering and folding, with one painted surface frequently laid over another. The works are typically displayed as spatial arrangements, in configurations determined by colour.

Anishta Chooramun’s work is informed by the diverse components that create contemporary society. She sees society as a jigsaw puzzle, which functions through co-existence and co-dependency. Anishta is curious about how humans affect each other, and how they conceptualise identity. She avoids overt representation of the human figure, and instead works with a combination of geometric and organic forms. Right angles imply order, mathematics and rationality, but they are combined with colour, curves and surface textures that signal action and movement. Anishta has recently begun to explore dance as a language, focusing on a classical Indian dance form called Kathak, originally performed by travellers. The Kathakars communicate stories through rhythmic foot movements, hand gestures, facial expressions and eye work, functioning as a kind of sign language. Anishta’s sculptures incorporate references to these gestures and movements, and her research process is informed by collaboration with a Kathak dancer.

Heather Cody is a Wexford-based photographer. Her work is a documentary response to the housing crisis in Ireland, with a specific focus on the experiences of homeless people based in her local area. She developed her project during 2019 through conversations and interactions with people living in tents under Wexford Bridge and in other isolated places. Through a combination of audio, text and photographic portraits, produced with permission, she documents a range of living situations. Some homeless people in Wexford live in tents, while others sleep in cars, shop doorways or the men’s hostel. Heather draws attention to personal histories and individual lived experiences of homelessness, and the lack of services for specific groups of vulnerable people, such as homeless women and children.

Penelope Collins explores an overlooked history of dance in Ireland through the archives of a Dublin Ballet school and company. Her research began with the discovery of a collection of letters in a hatbox belonging to her mother Patricia Ryan, a ballet teacher and choreographer. She set out to uncover the history of the school, through interviews and conversations, gaining a greater understanding of her mother’s artistic life and personality in the process. The archive currently includes rare film of rehearsals and performances, theatre programs, photographs and her mother’s teaching notes, written in French, as well as materials related to the first performance by Russian ballet dancers in Ireland. It also features letters exchanged with prominent writers, dancers, teachers, composers and conductors, including Samuel Beckett, Ninette de Valois, Nadine Nicolaeva-Legat and Micheál Mac Liammóir, among many others.

Collette Farnon’s work interrogates outmoded ideals of womanhood, focusing on an extreme femininity that is both narrow and repressive.  Working with a range of media, from video and drawing to sculptural installation, she explores the persistence of indecisiveness, sexual subservience and passivity as stereotyped attributes of the feminine.  She frequently combines theatrical modes of staging with exploration of everyday actions and objects, using humour and the absurd to comment on conventional standards, measures and norms of femininity, particularly with regard to beauty and skill. Her videos and installations are motivated by a critique of conventional ideals and attributes of masculinity, such as decisiveness, anger, the assertion of sexual independence, and displays of physical strength.

Lisa Freeman works across scripted performance, video and sculptural installation, borrowing elements from self-help books, archival material and mainstream media. In her installation Brows For Days at the LAB gallery, Freeman engages with the formal properties of both architecture and language, drawing columns, windows, graphics and punctuation into proximity.  Operating on the periphery of attention, her work utilises familiar symbols, including letter forms, to show how aspects of advertising language can seep into everyday experience in public and private encounters. Muted tones and transparent materials are arranged in an assembly of chaos and control, making connections between inflated things; bills, lungs, bellies, airbags, egos.

Marie-Louise Halpenny takes photographs of places where traumatic events have occurred. Her work, Under Reservation, is informed by analysis of the language commonly used in journalistic accounts of street crime and violence. She extracts textual elements from these accounts, but in her photographs she carefully resists the straightforward depiction of violence, and its consequences. When constructing her own images, she employs a deliberately detached perspective. She frequently makes subtle alterations to the photographs during the post-production process and, in some instances, combines multiple images to produce a single large-scale photograph. By introducing an element of unreliability into these images, she distances them from photojournalism, seeking to create a space for reflection.

Marie Phelan‘s work explores belief systems, ritual and their connection to place. She considers how beliefs can change over time, and sees this as important in understanding the present moment. She uses video, audio, sculpture and drawing to create an often imaginary world and communicate her research. Shapeshifter examines the traces of beliefs that persist within our landscape, focusing on their transformational qualities and subsequent ways of being. It is informed by cultural histories and archaeological research linked to the Oweynagat cave in Co. Roscommon. Sound has the ability to haunt a physical space and Shapeshifter uses audio and the acoustic properties of a specific place to establish a direct connection with an earlier era. Field recordings and observations of crows at dusk permeate the work through sound and material forms, including a beak-headed figure that stalks the landscape.

Dylan Ryan has been documenting the Cherrywood development in South County Dublin for the past three years, photographing ‘the other side of the hoarding’ on a regular basis. His process is about getting in close, reading the maps, reading the signs, and avoiding security. Mapping the construction of Cherrywood frame by frame, watching the landscape transform, he observes and records as the pieces of this new habitat are put together. He was drawn to the Cherrywood development because of its massive physical scale and budget (approximating two billion euro) and the rumours of corruption that have circulated around planning permission. His project is a ‘post-re-vision‘ of the corporate vision for Cherrywood,  referencing the temporary advertising architecture that is now commonplace on building sites, depicting utopian idylls and making promises with texts and images.

Audrey Walshe’s practice has always revolved around flowers and she draws inspiration from seasonal patterns and cycles of growth.  Sometimes working collaboratively, and often incorporating foraged flowers, she uses botanical materials to invoke memories of a specific time and place.  Even though flowers are immediately perishable, they are intrinsic to her process and she is especially interested in tensions generated by working with a deteriorating material, and in processes of collaborative production that are temporary.  Working with themes of decay and temporality, her sculptural installations use floral and plant material to manifest a state of impermanence, which she sees as ultimately hopeful.  Audrey also investigates the commodity culture that surrounds flowers, focusing specifically on what is hidden from consumers in the global flower industry.  At present she is expanding her own cutting garden for the new season and growing many of the materials needed to realise her upcoming projects.