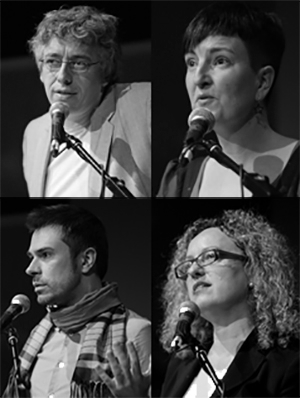 In May 2009, the MA in Visual Arts Practices and Project Arts Centre with the support of Culture Ireland, were delighted to present ‘Curatorial Session’, a project in which four internationally acclaimed curators; Bart De Baere, Tone Olaf Nielsen, Raimundas Malašauskas and Carolyn Christov-Bakargiev travelled to Dublin to conduct studio visits and to speak in a public forum responding to a series of questions posed by MAVIS students in relation to the field of curatorial practice. These questions are published in Curatorial Session Reader – Inquiries into Curatorial Practice.

Bart De Baere is Director of MuHKA, the Antwerp Museum of Contemporary Art, and was formerly Curator at Ghent Museum of Contemporary Art (now SMAK) and of documenta IX. Carolyn Christov-Bakargiev is Chief Curator at the Castello di Rivoli Museum of Contemporary Art in Italy, and was formerly Artistic Director for the 16th Sydney Biennale (2008) and was recently appointed as Artistic Director of documenta 13. Raimundas Malašauskas has been a freelance Curator since leaving the CAC in Vilnius, where he produced many projects including CAC TV. He is currently an adjunct Curator of Artists Space, New York, and lectures on the Graduate Program in Curatorial Practice, CCA San Francisco. Tone Olaf Nielsen is an independent Curator, educator, and co-founding member of the artist-curator collective Goll & Nielsen and the curatorial collective Kuratorisk Aktion who in 2006 realized the comprehensive project Rethinking Nordic Colonialism: A Postcolonial Exhibition Project in Five Acts (Iceland, Greenland, The Faroe Islands, and Finnish Sápmi).

John Gayer has written a conference report on Curatorial Session. The article was published in the July / August 2009 edition of the Visual Artists News Sheet. See www.visualartists.ie for further details.