As society is constructed, it relies on certain heritages to assemble the identities and traditions its populace adheres to, appearing as the political status quo, or hegemony of cultural from. In these forms of collective perception, how might contemporary art, as an eclectic and liberal form, realistically position itself within these discussions? Might this be useful for reimagining Irish politics past, present and future? Speakers include Helen Carey, curator and director of Limerick City Gallery, Roddy Buchanan visual artist, Amanda Ralph, visual artist. The seminar is chaired by Sean Lynch, artist.

A public seminar exploring a range of strategies engaged in by artists and curators in order to activate and operate within public realm spaces. Mariana Cánepa Luna and Max Andrews, Barcelona-based curatorial office Latitudes, will speak about their project entitled ‘Incidents of Travel’ (Casa del Lago, Mexico City, and Spring Workshop, Hong Kong) for which artists developed day-long city tours as a form of expanded studio visit. Aisling Prior, independent curator, will speak about Breaking Ground, the Ballymun Regeneration Limited per cent for art commissions, reflecting on a range of issues including the media’s label of “Poverty Tourism” being attached to Seamus Nolan’s short stay “Hotel Ballymun” located in the top floor of Clarke Tower. Sean Lynch artist will present a collection of his  research into how art objects and creative intentionality exist in the public realm: Minujin, Serra, Vermiculation, etc.

Contemporary Art of the American Midwest: Participatory and Relational Practices

In collaboration with Fire Station Artists’ Studios, MAVIS the MA in Visual Arts Practices are delighted to host a public lecture and discussion with critic and lecturer Sheila Dickinson, on Contemporary Art of the American Midwest: Participatory and Relational Practices. The event takes place on Thursday 7th February 2013 at 11am at the Fire Station Artist’s Studios, 11 Buckingham Street Lower, Dublin 1.

A panel discussion exploring the relationship between Curating and the University, featuring invited curators, researchers and educators. The issues to be explored include the history and future of the university gallery as an institution in Ireland and elsewhere; the relationship between collections and contemporary curatorial practice in the visual arts and other fields; the role of teaching collections in curatorial studies in the US and elsewhere; issues of access and resourcing in relation to university collections and archives; the role of curators as researchers and educators, and in making collections publicly accessible.

Anne Ellegood and Shamim M. Momin reflect on issues raised in Artforum’s Summer 2010 Museum Revisited issue, in relation to their own knowledge and experience of the West Coast art scene. In particular, the discussion will consider the relevance of ‘New Institutionalism’ (associated with the work of European curators such as Charles Esche and Maria Lind) to current curatorial practice in US institutions. 2pm, Saturday 16th October, 2010. Report by Anne Lynott, VAN March/April 2011.

Biannually students from the MA in Visual Arts Practices intern as Project Managers supporting the work of the Irish Commissioner for the Venice Biennale. This internship opportunity began in 2005 and has continued with each Commissioner through to 2009.

In May 2009, the MA in Visual Arts Practices and Project Arts Centre with the support of Culture Ireland, were delighted to present ‘Curatorial Session’, a project in which four internationally acclaimed curators; Bart De Baere, Tone Olaf Nielsen, Raimundas Malašauskas and Carolyn Christov-Bakargiev travelled to Dublin to conduct studio visits and to speak in a public forum responding to a series of questions posed by MAVIS students in relation to the field of curatorial practice. These questions are published in Curatorial Session: Reader – Inquiries into Curatorial Practice.

‘now as the divine hour’: the event in art and philosophy

The MA in Visual Arts Practices hosts GradCAM’s Speaking Matters programme on Friday 24th October 2008. Participants include Dr Joseph Cohen, Dept of Philosophy, UCD, who will speak on Heidegger’s The Origin of the Work of Art, Simon Morley, Artist and Theorist, Charlotte Moth, Artist, and Sinéad Hogan, Lecturer in Visual Art Practice, IADT. The session will be chaired by Tim Stott, NCAD research scholar at the Graduate School of Creative Arts and Media. The session hosted by MAVIS at The LAB, is in room 7 on the 4th floor, 2-5pm. 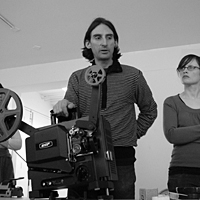 Pip Chodorov and Maeve Connolly at the Programming and Exhibiting 16mm Film workshop for Artists and Curators, 2008.

Workshop for Artists and Curators: Programming and Exhibiting 16mm Film

One-day practical workshop on Saturday 3rd May 2008, for artists and curators interested in curating or programming 16mm film screenings for gallery and non-gallery spaces. The workshop, led by Pip Chodorov (Re:Voir / The Film Gallery) is an introduction to working with experimental film co-ops and labs, sourcing and programming of films. 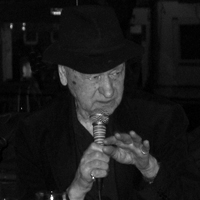 Discussion focused on the development of artist/filmmaker-led approaches to film and video distribution, from co-op structures in the 1960s to more recent developments. The conversation will explore some of the differences and tensions between these approaches and the curator-led model often associated with gallery, museum or biennial exhibitions. 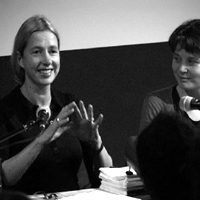 Screenings and panel discussions focussing on visual artists who direct, script and choreograph others in live action performed for the camera.This project was generously supported by Critical Voices 3, The Arts Council.

Five speakers involved in independent publishing will respond to the question “Why publish?’ through a discussion about publishing’s role in art practice. In the text Put About: A Critical Anthology On Independent Publishing (Book Works 2004), editor Maria Fusco posed the question “Why publish?” to fourteen parties involved in the production and distribution of printed matter. The varying responses collectively address social, spatial, political and economic issues that affect the will to publish. The day-long seminar in at Temple Bar Gallery & Studios will develop the themes raised in Put About and an accompanying symposium held at the Tate Modern 27 November 2004. Speakers are invited to respond to the question as a means to delve deeper into independent publishing as an alternative site of dissemination, experimentation, communication, and/or representation. 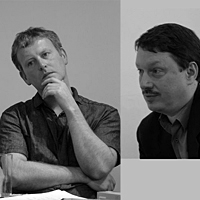 This symposium has been organised in order to provide a forum for questioning the condition, role and value of contemporary art criticism. While reference will be made in the first instance to recent debates in journals ranging from October and Critical Inquiry to Art Monthly, it is hoped that the concerns will not be limited by the terms of debate already established. An important ambition of this symposium is to consider the possibilities for contest and disagreement in discussions and commentaries on contemporary visual art. Key questions will therefore relate to the extent to which contemporary criticism might allow for meaningful disagreement. Is the notion of ‘criticism’, for instance, a complicitous illusion? Has art criticism become ‘writing without readers’? What role does ‘judgement’ have in current writings on art? What are the effects of ‘dominant’ critical idioms or strategies? Are there necessary conditions of criticism? Bringing together a number of critical voices from Ireland and beyond, this one-day event will allow for focused consideration of these and related questions.