The Finest Specimens of Fossilised Duration is an online exhibition curated by Róisín Power Hackett with artworks by Áine O’Hara and Philip Kenny.

The exhibition can be viewed at  Arts & Disability Ireland Curated Space 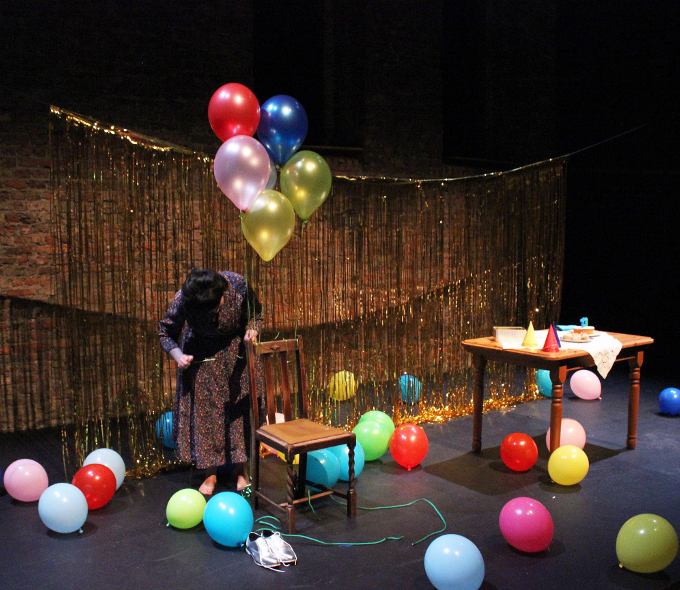 Memories are ‘the finest specimens of fossilised duration concretised as a result of a long sojourn, [and] are to be found in and through space’ –

The Finest Specimens of Fossilised Duration is an exhibition that presents Áine O’Hara’s The Birthday Party and Philip Kenney’s Ode to Sweeney’s. Through their multi-sensory works the exhibition aims to highlight the overlaps in theatre, spoken word and visual art that can make art more accessible. The goal of this exhibition is to display the plurality of our human perceptions. The variety of entry points into the artworks, whether aurally, visually or through the written word, enrich the possibilities of how they can be perceived.

Both The Birthday Party and Ode to Sweeney’s show how our memories are rooted more often in places than in time. These works affirm the term topoanalysis, coined by the philosopher Gaston Bachelard. Bachelard believed that memories are ‘the finest specimens of fossilised duration concretised as a result of a long sojourn, [and] are to be found in and through space’.

The Birthday Party by Áine O’Hara is both live-art and theatre. The work has previously appeared both in theatres and at live-art events including Smock Alley’s Scene and Heard festival in 2017. The Birthday Party speaks about home, and family, and why the inside of your head can be the most unwelcoming place of all. O’Hara’s work investigates how the places you are from shape who you are, whether you like it or not, and often compound mental illnesses further. For The Finest Specimens of Fossilised Duration, O’Hara’s performance has been re-imagined with a series of still images of her performances accompanied by an audio recorded performance and her performance script.

Ode to Sweeney’s by Philip Kenny is a film of a poem reflecting the artist’s experiences of a pub called Sweeney’s on Dame Street in Dublin, which has since closed. Sweeney’s was a hub for artistic creation in Dublin especially for music, spoken word, and improv comedy. The artist took part in many open mic nights there and became part of the creative community. This film has been specially made for The Finest Specimens of Fossilised Duration. It was a collaboration between Kenny and different professionals including Bob Glynn as director, Ruth Kerr as director of photography and editor, Jef Jef Jef and Shazbot as lighting designers and David Griffin as sound designer.

This exhibition was commissioned by Arts & Disability Ireland for their Curated Space 2020 and supported by The LAB Gallery and Dublin City Arts Office.

Arts & Disability Ireland is supported by the Arts Council.