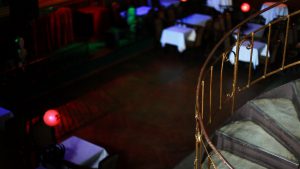 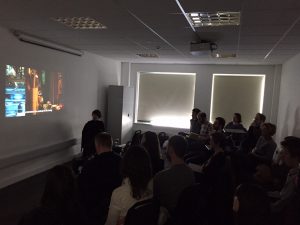 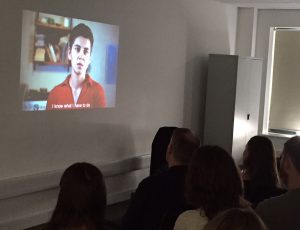 Anita Di Bianco’s current cycle of moving image work is concerned with the anchoring of texts to locations or histories, to possible forms of releasing text toward actors’ and sites’ voice and gesture – within the frame of video or stage. This type of ghostliness or re-animation necessitates (and even advocates) a series of relations between subjects living and dead, written and speaking, places densely inhabited as well as emptied, involvements both harmonious and antagonistic.

Anita Di Bianco’s works in film and print have been shown at PS1, Kunstwerke, the Kunsthaus Zürich, the Kunstverein Braunschweig, the Rotterdam Film Festival, Les Laboratoires d’Aubervilliers, K21 in Düsseldorf, the Kunstverein Salzburg, the Baltic Centre for Contemporary Art, the Glasgow International, and Waterside Project Space in London, among others. She received her Master of Fine Arts in video from Rutgers University in 1997 and was awarded a research stipend at the Rijksakademie by the Dutch Ministry of Culture in Amsterdam in 2000–2001. She has screened her films and lectured on media and the politics of cinematic re-enaction at Klartext! The Status of the Political in Contemporary Art in Berlin, at the Society for Cinema and Media Studies, and at Yale University’s film school, and since 2006 has taught a series of film theory seminars for teachers in New York State. Corrections and Clarifications, an ongoing publication project which started in 2001, is currently featured in the exhibition IN AN ABSOLUT WORLD TRUE TASTE COMES NATURALLY at Camberwell Space in London until 5 June, and was recently acquired by the Museum of Modern Art in New York. Information about her films, writings, and other projects can be found at www.anitadi.net